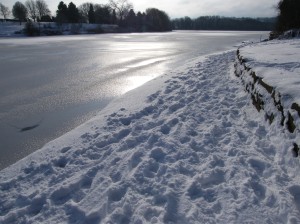 This is Coate Water country park (click on photo to enlarge), the object of a long struggle to prevent ‘development’ in the surrounding area. The latest effort by the ‘developers’ includes building 900 houses in the vicinity. Bath University attempted to blackmail local people by insisting that the area was the only possible one for a University campus. That effort was bombed out. The Tory led Council then made a commitment that if there was no University to be built there then there would be no houses built (see Breaking the fifty-first promise). That commitment was abandoned and they are now in favour of a ‘development’ including 900 houses. This was supposedly a ‘pragmatic’ position designed to ‘preserve Coate Water, when the Council is under pressure to build more than 30,000 extra houses in Swindon.

The Council’s ruling group made much of their opposition to an undemocratic planning process whereby central government determined an arbitrary number of houses, and the unelected regional development body imposed this figure on Swindon regardless of the views of local people. Ironically, the Tory Party at the national level has said that if elected they will end this planning system with ‘target’ housing numbers, and ‘give democracy’ back to local people. So why, with the possibility of a Tory government, has the Council’s ruling group decided to support what they had previously opposed?

See Coate campaign to carry on into next year