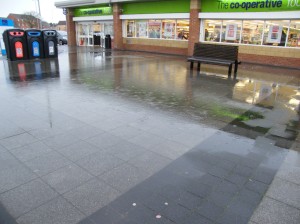 Swindon Borough Council has recently bought some land at Cavendish Square for more than £3 million. This was land that it gave away for free to the developer Leehampton when the original shopping centre was demolished and the new one built. It has bought the land on which sits the Co-op shop, the adjoining car park, and the pharmacy. It was done for commercial reasons; the rental income1. The property on the opposite side to the Co-op, including George Hall Court and the old Reuben George Hall, already belongs to the Council. The floor of the square itself, and the other shops, belong to a private company. The old Co-op site on which sits another car park, belongs to a private individual who has thus far failed to build on it despite planning permission having been granted.

The decision to hand over the land to Leehampton was the root of the problems that the local community have faced; cracking paving stones and flooding. In giving the land away the council lost control and local organisations were left to deal with a series of new owners, none of which has the least interest in the local community.

“A fantastic place to live, play and shop”

Cavendish Square was a typical 1960’s concrete built shopping centre. It wasn’t very pretty but it had a good range of shops, a Cafe, and was a focal point for the local community. It was well used. Its ‘regeneration’ failed to match up to the promises of the council. It was described by them as “a fantastic project to transform Cavendish Square.” It would “revamp community facilities creating a fantastic place to live, play and shop”. It would, apparently, be “returned to its former glory”. Instead, the base of the old Co-op remained, decaying concrete and bricks, flooding when it rained, dirty and dusty when it was dry, covered in litter. It dragged the whole environment down. (see caviposter ). At the same time the Reuben George Hall was boarded up, adding to the derelict picture of the “new” Square2.

On the basis of soundings from the local community it was intended that the scheme would include a roof over the square, enabling it to be locked up at night. Because of this plan the developers did not bother to put in any drainage in the main body of the square. The paving stones were laid on sand. However, since the roof was never constructed, and the absence of drainage, the Square is prone to flooding when there is heavy rain. A lake sneaks its way towards the entrance to the Library (see the picture above).

Phase 3 of the project, shops on the site of the demolished Co-op, was not completed. Leehampton failed to sell (unbuilt) units, blaming this on the recession. Originally the roof was to be built after the completion of Phase 3. However, with no prospect of it proceeding, in December 2008 the developer made a commitment that they would put a roof over the square in January/February of 2009. Unfortunately the council allowed them to renege on this commitment (Read about the history here farce.)

Leehampton subsequently sold on the shops that they owned, and the body of the square (the ground between the shops on both sides) to the Local Shopping REIT, its subsidiary NOS2 Ltd. Local organisations had real difficulty in getting the new owners to rectify problems with paving stones which were breaking up and dangerous. Whilst the work was eventually done it took more effort by local organisations than should have been necessary. The local Shopping REIT subsequently went belly up and decided to progressively “liquidate its assets”3. They sold the shops and square to an unknown company represented by Maunder Taylor. When asked who the owners were we were told that “they did not wish to be known”. Research later discovered them to be Lytton Rd Ltd based in Barnet.

Local organisations, primarily Parks & East Walcot Community Forum and SWAP, managed to get the derelict area tarmacked as a second car park. Since there was no prospect of a roof being built we did this with money from a bond set aside to pay for it; roughly £30,000 of the £120,000 bond. What remains of the money sits waiting for use on the square.

In discussion with the council it was agreed that the Chief Executive would write to NOS2 Ltd to suggest that they gifted the body of the square – the land between the shops on either side – to the council. The land is not an asset, but a liability; they can’t do anything with it. The intention was to relay it and put in drainage. Unfortunately, no response was forthcoming.

“An opportunity to reopen a dialogue”?

Now we have discovered the mystery owners the council has a responsibility to try to resolve the problems at the square. Council Leader David Renard has agreed that “there is an opportunity to try to re-open a dialogue, with a view to seeking to implement a drainage solution using the bond money held.” However, Local organisations will not support spending our money on putting in drainage so long as the land remains in the hands of a private company.

There is a case for the council to buy the shops now owned by Lytton Rd Ltd4. The current tenants are not paying their service charges because of what they consider to be the absence of service. They have not been kindly treated by the previous owners. The council may not consider this to be a commercial benefit. However, it should do so in order to rectify its mistake. The ruling administration has a responsibility to local people since the current parlous situation is the result of its decision to give away the land. So long as it is treated simply as an investment (unlikely ever to be a very lucrative one) then private owners will have no commitment to the interests of the local community.

The current council is unlikely to look favourably on buying back the shops. However, an absolute minimum for addressing the flooding issue is that the council needs to take into its ownership the ground between the shops and do the necessary work. If that means buying it back so be it. There is no way that a private company will spend money on it. They are only interested in maximising their revenue stream (the rent). This is the only way to resolve the conundrum. The council has a responsibility towards the local community as a result of its failed regeneration.