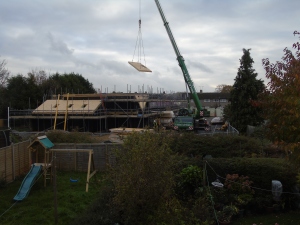 When local authorities build council housing, even if they receive central government grant, they borrow from the government’s own Public Works Loans Board (PWLB) in order to cover the up-front costs of building; paying the builder, the cost of the land if it’s not their own. They usually borrow fixed rate ‘maturity loans’. In other words they pay the loan back at the end of the loan period which might be 30 or 40 years. Additionally the PWLB charges them an annual interest rate for the loan. The lower the interest rate, the more money they can spend on building, the higher the rate then they can build less. So the interest rate has a major impact on what councils can spend on building. (Read on below or download a PDF here interest rate rise )

Recently, with no explanation, and no consultation, the government increased the rate of interest for councils borrowing from the PWLB by 1%; an unusually large increase. Government Minister Robert Jenryk said that the increase would not have a “significant impact” on them. Judge for yourself. To take the example of a fixed rate ‘maturity loan’ for 30 years, it was raised from 1.96% to 2.97%. That’s a 50% rise in the cost of interest payments. Since this steep rise was introduced, the rate has further increased to 3.27%. You can see the consequences by the example below of a £5 million loan.

This is a significant increase in interest payments. Servicing of a £5 million loan will now cost nearly £2 million more than before the 1% rate hike. That’s a nearly 25% increase on the overall cost as compared to the original rate.

Press comment has suggested that the reason for the increase is government concern at risky speculative purchases by councils of property and retail investments. Faced with the disappearance of central government grant to their General Funds, councils have sought a means of increasing their income to bolster their finances. Many have set up council owned private companies to carry out this activity. As well as building housing through these vehicles some councils are becoming property developers/speculators. At the extreme end of this activity was Spelthorne which borrowed £380 million to fund the purchase of the BT campus in Sunbury on Thames. This was four times the size of all its other assets combined. Another example is Woking Council which has invested £0.6 billion since March 2017 on retail and property.

In an editorial entitled “Local councils are set to lose the property game” (April 2017) the Financial Times reported that local authorities had invested £1.2 billion borrowed from the PWLB in real estate projects, in just one year. The PWLB is an agency of the Treasury “designed to fund local capital projects”.
Warning of the dangers of this development the FT said

“The return from this manoeuvre is very welcome at the councils. Government spending cuts have made it very difficult to fund local services, from social care to libraries to child care. Yes, the loans are long term, but the yields on the investments – offices, parks, residential developments, and so on – are not guaranteed. Prices fall. Rents go unpaid or are negotiated downward. Accentuating the risk, council finances are already leveraged, through tax receipts, to the local economy. When the loan to value ratios of the loans are 100%, as some are, the leverage is amplified further. It would not, require a big correction in the real estate market to turn these investments from a source of funding into an absorber of it.”

The FT said that the PWLB should simply refrain from lending for anything other than local capital projects.

Ultimately, if any council’s strategy fails, if there is a market downturn, then the consequence will be felt by local services.

Of course, it’s one thing to discourage speculative investments which risk the finances of the General Funds of these councils but why should local authority Housing Revenue Accounts be penalised if they are borrowing money to pay for up-front building costs for council housing?

Productive investment which results in increased revenue (the rents of new homes) and is socially useful and necessary, should not be penalised. The application of the increase to HRAs can only reduce the number of new council homes built. Moreover, entering into the ‘property game’ cannot resolve the under-funding of councils resulting from ‘austerity’ measures since 2010. The local government crisis can only be resolved by a return to grants connected with an annual assessment of local needs, something which the Tories ended in 2013. Councils should be barred from become property speculators/developers. They provide a public service, they are not businesses.

“It is completely unacceptable that the government failed to engage with the LGA and representatives of local authorities before hiking up the cost of council housebuilding.
It’s a shot at councils trying to regenerate the high street and reuse brownfield land and goes against the government’s stated ambition to renew our town centres, use brownfield over greenbelt, and provide the housing our country needs.”

The District Councils’ Network has said that the move could “seriously jeopardise” councils’ investment strategies whilst the London Councils umbrella group warned it will have a “severe impact on the viability of much-needed housing and regeneration schemes”.

A spokesperson for the Local Government Association said:

“This 1 per cent PWLB rate increase could cost councils an extra £70 million a year for borrowing to be undertaken in the next year…. It presents a real risk that capital schemes, including vital council house building projects, will cease to be affordable and may have to be cancelled as a result.”